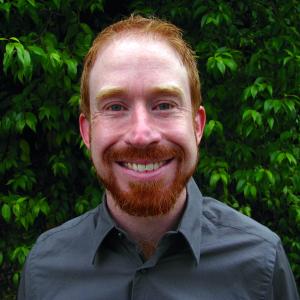 I’ve always been deeply curious about how organisms work and how the diversity of organisms came to be. My childhood involved endless hours observing tent moth caterpillars build their homes and metamorphose, cicadas molt and battle wasps, and frog eggs develop into tadpoles and then frogs.

Despite my love of biology, it took me a long time to realize I wanted to be a biologist and even longer to feel like I actually identified as a biologist. In high school my attention gravitated towards history, music, and math. In college I was on a mission to save the world from injustice, war, and environmental disaster while also trying to become an indie-rock star and a mathematician. My environmental studies degree required some biology and after I completed my requirements, I kept saying to myself that I wasn’t going to do a biology degree but I’d just take one more biology class. After graduating with a major in math and a minor in biology, my career aspirations had been narrowed down to musician and/or biologist. I landed a research assistant position working on the genetics of cell signaling pathways at Harvard Medical School and my band was busy recording and touring. At some point it became clear that I could be a biologist who had a serious music hobby but not the other way around.

Knowing I wanted to be a biologist didn’t mean I felt like I was a biologist. When I started my PhD in Biophysics, I was pretty sure someone was going to notice that I wasn’t a real biologist and tell me to leave. To avoid the embarrassment, I was strongly considering making a quiet exit. Before I ducked out, I managed to find inspiring mentors and colleagues who believed in me and made working on complex research problems fun and accessible. Their support gave me the confidence to start taking the lead on projects, give talks at conferences, publish papers, and eventually come to see myself as a biologist.

As a faculty member I now have the awesome responsibility of mentoring students in my classes, research lab, and our degree programs. My goal is to make these experiences as inclusive, meaningful, and rewarding as possible so that each person I work with can see themselves as what they want to be.

Outside of being a professor, I love spending time with my wife and son, running the trails, rock climbing in the gym and occasionally at the crag, and playing music.

We study the causes of cellular trait variation. Our primary system is mating pheromone induced cell differentiation in budding yeasts (i.e. baker’s yeast). We use a broad array of techniques from genome editing to fluorescence microscopy to computer modeling. Much of our work focuses on RNA and protein metabolism. Current student projects include:

Turman G, Pollard DA (2019). NucJuke: A tool for re-ranking gRNAs based on chromatin accessibility for CRISPR-Cas9 Experiments in yeast. http://nucjuke.biol.wwu.edu