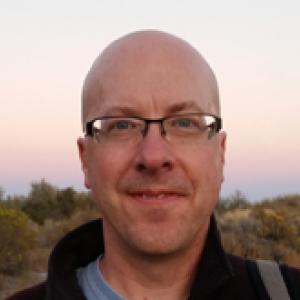 Growing up in Seattle in the 1970s, I was a shy, bookish child who had a penchant for spelling, read the Lord of the Rings trilogy over and over, became obsessed with Dungeons & Dragons, and whose only mainstream interest was that I was smitten with the Seattle Supersonics. My path to becoming an entomologist started at an early age when, on a family vacation just before my 11th birthday, my mind was blown by an exhibit at the Denver Museum of Natural History that showed butterfly diversity in the Rocky Mountains. That defining moment spurred a passion for insect diversity that has continued to this day. I had the good fortune of having a childhood friend at the time whose father, John Edwards, was an entomology professor at the UW. He connected me with other entomologists in the Seattle area, some of whom became incredibly important mentors who also provided a social connection that I wasn’t able to easily form with kids my age. Two of my most important early mentors were Sharon Collman, an entomologist with King Co. Cooperative Extension, and Jon Pelham, who curated the butterfly collection at the UW Burke Museum. I had found my people, and none of us seemed to care that they were at least twice my age.

While still in middle school, I began attending regional meetings of professional entomologists and had become so fixated on butterfly diversity that I had learned the Latin names of all of the 120 or so species known from Washington at that time. This fixation continued through high school, during which I spent almost every weekend from April through September on insect collecting trips throughout the state. Needless to say, I wasn’t a typical teenager, whatever that is, and I revealed my entomological interests to only a select few trusted friends for fear of the teasing I'd have gotten from classmates if word had gotten out. I was suffering enough from incessant teasing about my height, as I was a late bloomer who, as a sophomore was much shorter than most freshmen. My small cluster of friends were all nerds and geeks, most of whom were also taking Latin as our language of choice and shared my addiction with first generation arcade video games (Space Invaders and Asteroids, in particular) - a vice that drained most of my Seattle Times paper route earnings, one quarter at a time.

By age 15, I had decided that I was going to earn a PhD in entomology and would become a university professor. I was an unremarkable student in high school and despite my interests struggled with my first high school biology class, but I did well enough to meet the UW's modest admission standards at the time. There, I majored in zoology and worked in John Edwards’ research lab starting in my freshman year, collecting, sorting, and identifying insects from the Mt. St. Helens blast zone in the years soon after its 1980 eruption. When not in class or in the lab, I frequented the student union building, where I played countless hours of pool, snooker, poker, and foosball with friends. The latter led to the greatest “athletic” accomplishment of my life, which was being part of a doubles team that won the PNW intercollegiate foosball championship.

Later in my undergraduate years, I also worked in the labs of other insect ecologists and evolutionary biologists in the Zoology Department, and they encouraged me to apply to the Ecology and Evolutionary Biology program at Cornell University, which I attended for my PhD studies while working in the lab of Richard Root. My ties to PNW butterflies were still so strong that each summer, I would drive from NY to WA and back for 5 summers of butterfly population biology research in the Cascades. It was during graduate school that I met and later married Carol Yoon, another graduate student in the same program. After grad school, I became a postdoctoral research in the lab of Robert Denno at the Entomology Department at the University of Maryland, working on the population genetics of coastal saltmarsh-dwelling planthoppers – the field work for which kept me in swarms of biting flies. Our first child, Emiko, was born during that time and it was clear that it was time to land a permanent job! I was determined to get back to the Pacific Northwest…enough so that the position I am in is actually the third faculty position at WWU to which I applied. Our second child, Erik, was born during my first quarter here, so it was an exciting year to say the least!

Though I had lots of guidance and support along the way, my academic journey has not been without its challenges. My poor study habits from high school led to a wake up call in my freshman year in college, and I can still recall having to re-take Calculus II…finding out the hard way that regularly scoring 20% on exams and quizzes isn’t the way to pass a course! I also remember the terror I felt when I took an exam in Genetics and spent the first half hour flipping pages looking for a question that would give me a confident starting point. I’ve been plagued by imposter syndrome throughout my life, but it was particularly profound in graduate school, when I was surrounded by all sorts of intellectual peers with fancy academic pedigrees who came from sophisticated cities on the East Coast (this was before Amazon, Microsoft, Starbucks, and UPS had elevated my hometown of Seattle to global prominence). That said, even though I’ve been a professor for decades, I still sometimes suffer from imposter syndrome in academic settings. That challenge, together with my awkward social skills used to result in panic attacks at random times in front of classes I taught as a graduate teaching assistant…these persisted through my first several years as a faculty member at WWU, making me seriously question if I had chosen the right career!

I am glad to have overcome these challenges, as I greatly enjoy working with students in the classes I teach, as an academic advisor, or as a research advisor. Also, as someone who has spent much of his life feeling like a social outsider, I try to use my position as an opportunity to support students and others who have been disadvantaged by power dynamics, as well as to stand up against those who abuse their power. Over the past 20+ years at Western, I’ve had nearly 100 students work in my lab, and have been proud to follow their accomplishments as they follow their paths as professors, research biologists, doctors, dentists, physical therapists, K-12 educators, and parents. One former student from my lab even became an Invicta MMA champion, though I don’t think that conducting mating experiments with beetles in my lab had anything to do with her success in the octagon!

Other random tidbits about me:

Land use effects on insect diversity and community composition

Community consequences of mutualistic interactions between herbivorous insects and ants

1987 B.S. in Zoology, University of Washington.