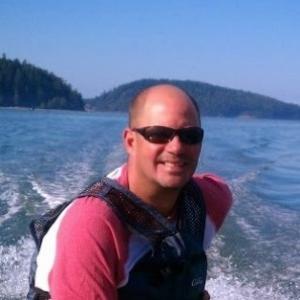 Monday and Wednesday 1:30PM-2:30PM, by appointment

I was born and raised in the far southeastern corner of Washington State.  This region is a high plains desert, shrub-steppe ecosystem.  My childhood hometown, Clarkston, WA, sits on the banks of the Snake River, at the bottom of a valley carved out of laminar basalt flows by the erosive power of the Snake and Clearwater Rivers.  With it’s neighboring city of Lewiston, ID, the two towns are the gateway to North America’s deepest river gorge, Hells Canyon.  My hometown is also within the region that is the ancestral home of the Nez Perce tribe.  My youth was spent outdoors, turning over rocks looking for snakes and insects, fishing the Snake River, and exploring the mystical petroglyphs carved into the walls of basalt cliffs.  This magical place shaped every aspect of who I am today; from my love of natural history and ecology, to my personal values.

I entered the world in 1971 and was greeted by an older sister, and two 20 year old, hard-working, blue-collar parents.  Eight years later we welcomed my younger brother.  I am a first-generation college student and was privileged to have parents who, despite not having the means or opportunity to attend college themselves, encouraged me to pursue my academic interests.  My path to my current position (which is also my dream job!), was a circuitous one, and I am proof that not all who wander are lost.

My academic journey started at a satellite community college (Walla Walla Community College, Clarkston Branch), where in 1992 I finished an Associates in Arts Degree.  With this degree in hand, I went to the University of Idaho (U of I) in fall of 1992 intent on becoming a geologist (it’s true – my first love was rocks!).  In the summer prior to my enrollment at U of I, I lost my father to suicide after his brief but intense battle with mental illness.  Without an academic pedigree, were it not for the support and guidance I received from faculty and staff at the U of I, I without question would have wandered off the academic path.  Instead, I learned about the power of empathy and how one individual might not change the world, but they can change the world for one individual.

My professional career started as a public educator in Ilwaco, WA, a small seaside town where the Columbia River crashes into the Pacific Ocean.  After spending two adventure-filled years there, I applied to graduate school, and was fortunate enough (I say that because I had no idea how to go about selecting schools or potential advisors!  Come talk with me if you want advice about this…) to be accepted for graduate school by, and study under, WWU and Shannon Point Maine Scientist, Dr. Suzanne Strom, who introduced me to the world of plankton.  It was at this very university where my love for oceanography and marine science was borne!  For my Master’s research I spent six weeks in the Bering Sea conducting research on an anomalous bloom of microalgae.  This experience was life-changing for me, and it was at this point in my life that I finally figured out what and who I wanted to be.  With my positive experience in Dr. Strom’s lab under my belt, I migrated south to University of Washington where I attained a Ph.D. in Biological Oceanography in 2006 studying under Dr. Evelyn Lessard.  For my Ph.D. I conducted research off the Washington State and Vancouver Island coasts, studying the ecology of harmful algal blooms.  After receiving my Ph.D., I went to the University of South Florida as a postdoctoral research associate, studying plankton ecology in the oxygen minimum zones of the northeast equatorial Pacific Ocean.  While Florida was a fun place to live and conduct biological oceanographic studies, I knew that someday I wanted to return to the Pacific Northwest.

Having spent time at WWU as a student, I knew how fortunate I was when I was given the opportunity to return in 2009, where I was hired as a resident marine scientist at the Shannon Point Marine Center, and an instructor in the biology department.  In the fall of 2018, my career dream came true, and I became faculty in WWU’s Biology Department.

Outside of my academic position, I am a husband to Nicole, and a father to my sons Fletcher and Quint, and my daughter Gabby.  My family likes to be outside, foraging for wild foods and exploring the Salish Sea on our boat.  I enjoy music of all kinds, and play the guitar.  I am the guy sitting at the campfire who can play the first three or four measures of about 20 songs, but can’t play any of them to completion!

If the lights on in my office, consider it an open invitation to stop in and introduce yourself!