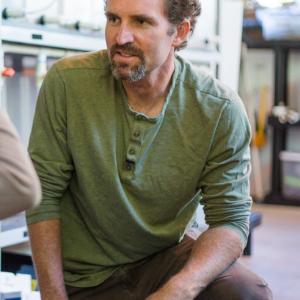 I hope the information in this biography provides you with a better understanding of me as person and instructor.  Students, staff, and faculty all have such interesting and unique paths, and I hope that sharing information helps us understand the importance of diverse perspectives and the need to work together to move forward.

I was born in New York but grew up in southern California.  I have two younger brothers, who are twins, and spent much of my childhood at the beach, surfing and bodyboarding.  In fact, I spent so much time at the beach during high school that I did poorly in most of my classes in high school.  My favorite class was woodworking, in which I received straight A’s during all four years of high school.  After graduating, I went to community college, and finally enjoyed school and learning—though I struggled with the decision to stay in school and seriously contemplated getting a job in construction.  However, the flexible hours of community college made it much easier to get to the beach, and so I enroll in school.  During high school and community college, I had several jobs. I worked at Togos (a sandwich shop) as a manager, at a pet store as a fresh and saltwater aquarium specialist, at a Christmas tree farm as a tree cutter, and at my uncle’s air conditioning and heating company as an installation technician.

After community college, I transferred to UC Santa Cruz, and majored in marine science.  During my senior year, I helped a graduate student with her research, which led me to designing an independent research project of my own.  In looking back, this graduate student had a huge impact on my future.  Through her encouragement and support, I had the confidence to work on and complete this project.  In fact, I enjoyed the experience so much that I decided to apply to graduate school—sadly, I was rejected from all the schools I applied (more on this in a minute).

At the end of my undergraduate degree, I participated in an internship and course that were pivotal in my life.  The internship was the Summer Systematics Institute at the California Academy of Science.  I worked on a project with fossil sand dollars.  This program provided me with important research training, a solid understanding of phylogenetics, and hooked me on echinoderms.  I also took a course at the Friday Harbor Laboratories (the University of Washington’s marine lab) on embryology.  This was a graduate-level course, and I learned a lot about graduate school, research, and embryology of marine organisms during the course.

After graduating, I was unsure what to do next.  I had been rejected from the graduate schools and wasn’t sure about where to start looking for jobs.  Luckily for me, one of the graduate students that I met during the course at Friday Harbor Laboratories was headed to Tahiti for her research and was looking for a field assistant.  I had extensive experience in the water, and didn’t have any classes or job to miss.  So I volunteered.  Because of my work while in Tahiti, I was offered a job as a research technician at UC Santa Barbara working on intertidal ecology.  While in Santa Barbara, I met Melissa to whom I am now married.  After a year of working at UC Santa Barbara, I applied to graduate schools again, and this time was accepted at the University of Florida, where I did my Ph.D.

Graduate school was an emotional roller coaster.  I was living away from family, friends, and Melissa in Florida, which is very different from California.  However, after about a year I developed very close friendships with some of the graduate students in the department.  In fact, much of my learning in graduate school came from interactions with these people.  Three years into my dissertation, my advisor unexpectedly passed away.  Because I was the senior student in the lab, I became responsible for helping several Master’s students to graduate and completing some of my advisor’s research.  I matured greatly during this period, which in reality probably just brought me up to the level of most of my peers.  Just before graduating, I ask Melissa to marry me, which surprisingly she was willing to do.

Throughout my life, I struggled in school because I am slightly dyslexic and a slow reader.  I often overlook typos in my written work and struggle to complete long reading assignments.  As a result, I have always worried that people think that I am not smart enough.  Earlier in my life, I would try to hide this part of me.  However, I have found it much better to acknowledge my weaknesses and work on strategies to improve the quality and efficiency of my work.

After graduating from UF, I had an exciting three years.  I moved back to California for a post-doctoral position at the Bodega Marine Laboratory (the marine lab of UC Davis), got married, bought my first house, fathered twins, and was hired at Western (plus at the beach where I often bodyboarded, several people were attacked by great white sharks!).

I moved to Bellingham in 2006. My research focuses on the ability of organisms to change their phenotype in response to the environment, and I typically study near-shore marine invertebrates.  I teach Biology 204, 340 (Biostats), 460 (Invertebrate Biology), 407 (Marine Ecology), and Tropical Marine Research in Mexico during some summers.  I often have graduate students working in my lab.  And I love science!

Some of the most memorable experiences in my life have been traveling.  My father is a retired airline pilot, and I traveled throughout the US and parts of Europe with family and friends.  While in high school, I had a close group of friends.  We backpacked throughout California, mostly in Yosemite, the eastern Sierra, and Mojave.  We also took lots of surf trips to northern Baja California and the Big Sur coast.  Related to science, I have also traveled internationally a bit to amazing places like Baja California, Tahiti, Tanzania, New Zealand, Canada, and England.

My twin boys are now 14 and just starting high school.  They are interested in flying airplanes and cross-country.

Besides surfing and bodyboarding (which I rarely do these days), I play soccer and volleyball, the drums for fun.  I play in a couple of bands around town.  I do a lot of woodworking during the summer.  Because getting to surf is a bit difficult from Bellingham, I like to ski, hunt for edible mushrooms, and sail or kayak.  I also try to work on my Spanish, so I am not totally dependent on Alejandro to make sure I don’t get onions (which I hate) in my food when we are teaching in Mexico.  ?Es possible tener eso sin cebollas?  My high score in bowling is 232.

Students in my laboratory focus on how organisms alter their morphology and behavior in response to different environmental conditions, typically biotic conditions. Within the last thirty years research has demonstrated that these responses, referred to as phenotypic plasticity, are very common in nature. The question now is how these responses affect evolutionary and ecological processes. This is the overarching question that drives research in my laboratory.