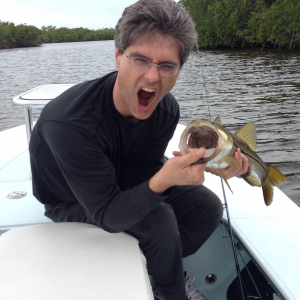 Our recent work made the cover of Evolution & Development

I am a native of the Florida Gulf-Coast. My family originally received a land grant from the Spanish crown in the late 1700's and many descendants still live in the same community.

Undergraduate research with Dr. William (Doc) Herrnkind at FSU provided my first exposure to marine science. THANK YOU DOC! Masters studies with Dr. Scott Steppan (also at FSU) examined developmental factors that had profound effects on restricting marsupial evolution. My lab remains focused on studies of developmental constraint. During the years between my BS and MS degrees I performed science education outreach at FSU’s Turkey Point Marine Lab and my involvement in outreach has continued since that time. I did my doctoral work at the University of Chicago with Dr. Mark Westneat, who was also curator of the fish collection at the Field Museum. My focus on biomechanics, collection-based studies, phylogenetics, taxonomy and field expeditions are legacies of my time working with Mark. Post-doctoral research at Syracuse University with Dr. Craig Albertson heavily influenced my interest in evolvability and underscored the advantages of combining work with model and non-model species. Doc, Scott, Mark and Craig have my everlasting gratitude.

I am an evolutionary-developmental (Evo-Devo) biologist whose research program integrates evolutionary studies of fish feeding mechanics with investigations of skull development. My broad goal is to understand the factors that direct evolution down particular paths as organismal lineages diversify into different ecological niches.

I am currently developing research programs focused on larval fishes in the Salish Sea and experimental studies of development using genetically modified zebrafish. My joint position in the Department of Biology and Western’s new Marine and Coastal Science program facilitates the combination of these efforts.

Because we approach our work from many directions the lab can accommodate people with a wide range of interests. All lab members become familiar with how investigations in our individual subject areas intersect and combine to provide a deeper understanding of the factors that shape evolutionary diversification.

An over-arching theme in our research is merging comparative investigations of non-model organisms with experimental studies of zebrafish. Our evolutionary work examines cranial form and function in multiple fishes from the same lineage in order to: 1) describe large-scale patterns in adaptive radiations; and 2) identify specific aspects of skull anatomy that play important roles in the biomechanics of fish feeding. We then conduct laboratory experiments to understand how the morphologies of mechanically significant cranial features are determined during fish development. This work utilizes an array of genetically modified zebrafish lines to study bone morphogenesis. The combination of these efforts allows us to identify aspects of developmental organization that have either promoted or constrained specific evolutionary changes in skull morphology, bite mechanics, and feeding ecology.

U/G    Began the work as an undergraduate, continued as a graduate student

W. James Cooper. 2009. The Biogeography Of Damselfish Skull Evolution: A Major Radiation Throughout The Indo-West Pacific Produces No Unique Skull Shapes. in The Proceedings of the 11th International Coral Reef Symposium