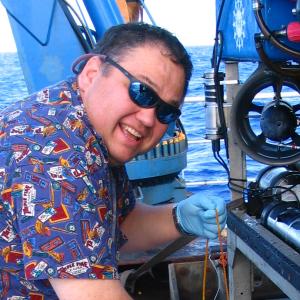 Posted for each course on Canvas and by appointment

My specialty is the marine microbial ecology and geomicrobiology of hydrothermal vent systems. I also maintain interests in terrestrial and aquatic microbial ecology, microbe-macrobe symbiotic relationships, bioremediation and microbial cycles that impact global climate change. My focus in recent years has been bimodal. First, is the study of microbial mats in and around hydrothermal vents, this includes the biodiversity and biogeography of the Zetaproteobacteria from several vent sites across the Pacific Ocean (with Sean McAllister and David Butterfield, NOAA PMEL) as well as the discovery and description of ultra-diffuse and ultra-deep vents as sites of massive umber deposits at the base of Loihi Seamount as part of the Iron Microbial Observatory or FeMO (with FeMO team members). In addition, I have been involved with the discovery of neutrophilic iron-oxidizing bacteria known as the Zetaproteobacteria, which have been formally accepted as a novel class of Proteobacteria (with David Emerson, Bigelow Labs), the demonstration that Zetaproteobacteria can act as pioneering colonizers in the formation of microbial mats, and the detection of hyper-diverse microbial communities associated with deep-ocean basalts (with Cara Santelli, Univ Minn). My lab was also the first to describe multiple microbial mat communities associated with active submarine volcanoes along the Mariana Arc region (with Rick Davis, NASA). Beyond establishing the basic microbial census and phylogenetic information, we also identified that this area was a microbial hotspot with unusually high biodiversity and our discoveries were used to support the federal government's recommendation and eventual formation of the Mariana Marine Sanctuary, which is now a national monument in the Western Pacific. I was able to return to the Mariana region in 2014 as chief scientist where I led an expedition, the Submarine Ring of Fire "Ironman" cruise.

My lab's latest investigations have shown that in high-iron environments, such as diffuse hydrothermal vents, the Zetaproteobacteria are important members of the microbial mat community, driving its structure and functioning as ecosystem engineers. We are presently monitoring the ecological changes associated with these microbial communities that have occurred after a major eruptive event using molecular microbial techniques including functional genomics coupled with fine-scale sampling. Genome-resolved metagenomics allows for the specific binning of microbial genomes based on genomic signatures present in composite metagenome assemblies (with Heather Fullerton, College of Charleston). Through this approach we have identified a Cyc2-like protein as the previously elusive site for iron oxidation (i.e., initial electron transfer) across the outer membrane of a majority of the Zetaproteobacteria. We have also used SSU rRNA high-throughput amplicon sequencing in coordination with geochemical analysis to show the functional role of the lithotrophically-driven communities associated with iron- and sulfur-rich hydrothermal venting along the Mariana Arc and back-arc. Higher diversity was observed in Zetaproteobacterial-dominated mats in addition to their altering the mat habitat and enhancing community interactions and complexity.

My lab's second research mode targets the deep subsurface biosphere. Currently, we are examining the occurrence of unique Zetaproteobacteria residing in the deep subsurface as part of the Integrated Ocean Drilling Program's (IODP) expedition 331 to hydrothermally active mounds in the Okinawa Trough. Our accomplishments here also include the discovery of reductive dehalogenase homologous (rdhA) genes found in Cloroflexi from the deep subsurface biosphere through single cell genomics (with Heather Fullerton, College of Charleston) and a description of the biogeography of Thermococcus isolates emanating from the subsurface (with Mark Price, Whatcom Comm College). We also continue to describe the community structure and diversity of extremophilic Archaea associated with deep-sea springs emanating pH 12.5 fluids that occur at the summit of mud volcanoes located along the Mariana Forearc (with Patty Fryer, Univ Hawaii and Geoff Wheat, Univ of Alaska). These microbial communities represent an upper boundary with respect to pH that life is known to exist on Earth and are fueled by serpentinization reactions occurring ~30 kilometers deep within the oceanic crust. To this end, I have participated in IODP expedition 366 (Mariana Convergent Margin). My goal is to elucidate the metabolic pathways of the extremophilic archaea associated with Forearc mud volcanoes that are undergoing anaerobic methane oxidation coupled with sulfate reduction most likely through novel metabolic pathways.

My educational activities include facilitating opportunities for both undergraduates and Master's level graduate students. I am also involved with educational outreach at both the elementary and secondary levels. Myself and my students have recently participated in both science fair and culture camp activities with high school and grade school students in Hydaburg, Alaska (with Wendy Smythe, Univ of Minn-Duluth). My teaching here at Western focuses in the areas of cell and molecular biology, microbiology, molecular phylogeny, and microbial ecology.