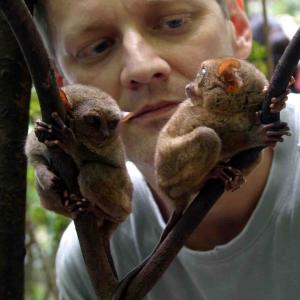 I come from a very normal Chicago suburb, a place where nothing out of the ordinary ever happens. Perhaps that is why I spent most of my adult working life abroad. Of the past 27 years, more than ten were spent in Indonesia, two-and-a-half more were in Singapore, and I spent a year-and-a-half in Korea. Thus, most of my life as a scientist and educator has been spent as an outsider living inside several Asian societies. My colleagues and students there come from a variety of countries, ethnicities, religions, and language proficiencies. Whether at home, at work, in the classroom, or in the streets, as an American, I am always a member of a very small minority when living and working abroad.

My path to science was not direct. After failing out of college once, with a 0.6 GPA, I returned in my mid-twenties. A trip to the library, in which I had gone looking for a Peanuts comic strip I had seen a few weeks before, led me instead to a different book altogether, The Naked Ape, by Oxford University zoologist, Desmond Morris. After one reading I was hooked. The author asked the questions I asked. I felt I had been an evolutionary biologist my whole life, and only lacked the necessary training. I breezed through Santa Monica College and UCLA, and got a National Science Foundation Predoctoral Research Fellowship to attend graduate school.

I began studying tarsiers in 1993, after first beginning my PhD program at Washington University in St. Louis as a prospective paleontologist. I had entered the biological anthropology program to study speciation in fossil primates. But having heard that biological anthropologists had the reputation of being bad biologists, I made sure to complete the core curricula for both Biological Anthropology and the Program in Population Biology. This led me to encounter Kerry Shaw, a graduate student who was completing a doctoral thesis on crickets using genetic and acoustic data to test hypotheses of speciation and biogeography among the Hawaiian Islands. Kerry’s project sounded very similar to something I had heard about in primatological circles: tarsiers on Sulawesi had a duet call, this call showed geographically-structured variation, and it might indicate a hidden constellation of cryptic tarsier species that mapped onto the complex biogeography of Sulawesi. Hawaiian crickets . . . Sulawesi tarsiers . . . what’s the difference? It sounded like the same project to me. Some off-the-cuff advice I had heard from the eminent paleontologist, the late Elwyn Simons, came back to me: if you want to get a PhD it is very easy, just find a project you admire and do the same study on a different species.

I proposed a pioneering study that would use systematic sampling of wild tarsier populations for genetic, acoustic, and morphologic data, and compare those results with biogeographic patterns on the Indonesian island of Sulawesi. My very first grant proposal reviews came back with a comment, “Shekelle has outlined a career’s worth of work.” Twenty-eight years later I am approaching the answer to my first question: how many tarsier species are on Sulawesi and surrounding islands? When I began, textbooks listed 1-3. Now the evidence is that there are 16 or more. My colleagues and I have named, or elevated, the total to 13 at present. The results of my research caught the attention of the conservation community, and now, as a member of the IUCN Red List, Species Survival Commission, Primate Specialist Group, I have the responsibility for the Red List assessments for all tarsiers, as well as all of the other primates from Sulawesi (26 assessments in all). Thus, mine has become an integrated research and conservation program, beginning with field surveys, continuing through to the naming of the new taxa, and then writing the conservation assessments for them all.

After Chicago, Los Angeles, St. Louis, Jakarta, Singapore, and Seoul, Bellingham is now my home. I have two children in the area. The first was born on a trip back to the USA and raised in Indonesia and Singapore. Indonesian was her first language, and the language we spoke at home. The second was born in Singapore and raised here. Both are artists. The first is just finishing art college, and the second in is in middle school. Oh, and I suppose I should add that whether here or there, a guitar is with me everywhere I go. You have to have something to do during those awkward silences, right?

The year 2020 was the first time in 27 years that I did not spend at least a month or two in Southeast Asia. I hope to go back soon. I teach a field methods course there through an Indonesian university, and would love to do it again . . . perhaps through Western next time.

Below are some press pieces about me and my work. I also have worked on several nature films.

2011 – Tarsier Towers, 25-episode program covering a year in the lives of three neighboring families of tarsiers. Co-Producer and Scientific Consultant. Produced by Artists in Motion.