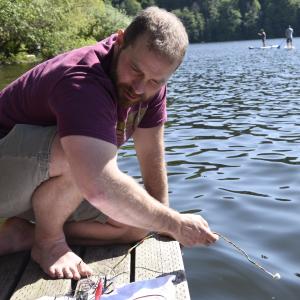 For example: in Maine and Nova Scotia European green crabs have been implicated in drastic losses in eelgrass habitat as well as declines in the softshell clam fishery.  However, in California, Oregon, and Washington the same invasive crab has caused few noticeable impacts. This difference is likely due in part to large populations of predatory native crabs (predominantly red rock crabs) that limit the numbers of green crabs on the west coast but not the east coast. Knowing the effects that these native predators have on invasive green crab populations can inform management priorities and help us use resources more efficiently.